Today I finished the Dutch translation of Sappho's Leap - Sappho's sprong - by Erica Jong. I had about 70 pages left to read and it took me about an hour. I started reading the book about 3 months ago, on and of, mostly in the tram on my way to work. I live in Amterdam, a very liberated city, but still people looked a bit awkward when they saw the cover of my book: 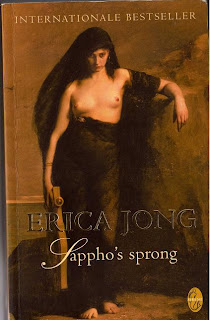 I must say i love this cover, its very pretty. According to the information inside the book its by Charles-August Mengin called Sappho and painted in 1877. Manchester Art Gallery, UK / The Bridgeman Art Library
I really enjoyed reading this book. I did not know much about Sappho before I started reading this, and I realize I still don't. Simply because there is not much known about this wonderful artist, singer and poet.
Wikipedia has some information on her, which starts with:
"Sappho [...] was an Ancient Greek poet, born on the island of Lesbos. Later Greeks included her in the canonical list of nine lyric poets. Her birth was sometime between 630 and 612 BC, and it is said that she died around 570 BC, but little is known for certain about her life. The bulk of her poetry, which was well-known and greatly admired throughout antiquity, has been lost, but her immense reputation has endured through surviving fragments. The adjectives deriving from her name and place of birth (Sapphic and Lesbian) came to be associated with female homosexuality."
Based on the few fragments of her poetry that survided time and her immense reputation, Erica Jong manages to write a story about this woman which totally sucked me up. I dissapeared in this book, it was awsome. Usually I read with dizzying speed through books, reading about a 100 pages per hour in Dutch (and still be able to tell the story) but this one made me read slower, indulge the words, the sentences.
Sappho's life, loves (both with males and females0, travels, ups and downs.. its all written in a way you travel with her. I totally reccommend you read the book for your self, because its a journey I wished I could have made, have I lived in that time. If you like the ancient Greek period and want to read about a female perspective, read teh book. No bloody arena's, no male dictators. Ok there is one Pittacus, who bannes Sappho from Lesbos. But thats not bad, because of her being banned, she starts her journey.
The blurb on the back of the book says: "If odysseus was a woman, this would be the journey he had traveled." quoted by Susan Cheever And you know? I could not have said it any better.
I have this book on my reading pile for years, i bought it on febryary 2nd, 2004. Finally i made a start with reading the books on this pile, wel actually, on there seperate shelf in my 'library.' The Sunday Salon is a good way of making me read at least one day a week. I have a new job, which only takes me about 5 minutes to get there on my bycicle. Too short for even 1 chapter to listen to a book. So now, on Sundays, I make myself sit on the couch and read a book, at least for an hour.
I still have about 2 meters of books "to be read' but I think I'm going to re-read book one of The Discworld Novels, by Terry Pratchett: The colour of magic first, before I go to back to that shelf. A friend of mine is going to bring the DVD on our next meeting - witch is also our first, but thats a totally different story - so I'm going to read the book first, to refresh my memory.
Gepost door Marion op 10/25/2009 02:14:00 p.m.

Wow, it's great that TSS actually makes you read more/again! :) Interesting post -- I didn't know much about Sappho either ;)